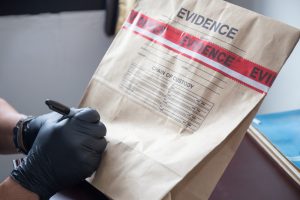 Without evidence, there’s often no true way to prove that someone committed a crime. Regardless of the type of crime, the basic goals of crime scene investigators are to reconstruct the crime scene, preserve evidence for analysis, and identify one or more suspects. After carefully approaching and securing a crime scene and conducting an initial survey of the area, it’s time to begin evaluating the various types of physical evidence left behind.

In this article, we highlight the basic steps in the collection of crime scene evidence and best practices for safely delivering the most important pieces of evidence to a lab for investigation.

Important Types of Evidence to Collect

There are many valuable pieces of evidence to collect at a crime scene to pursue an effective investigation.

Things like gunshot residue, firearms, illegal drugs, and chemicals are known as trace evidence. To collect these types of items, investigators use gloves, face masks, tweezers, and sealable containers. Another common type of evidence found at crime scenes is bodily fluids, for which investigators may need to take a blood sample, conduct DNA analysis, and study blood splatter patterns. This is called biological evidence.

Fingerprints left behind also serve as an important form of evidence, as well as pieces of hair, clothing fibers, and footprint impressions. This is called latent print evidence. And digital evidence includes things like email messages and cell phone records.

However, one of the biggest challenges of evidence collection is maintaining its integrity and ensuring that it doesn’t become contaminated or gets tampered with. Whether its intentional or unintentional, crime scene evidence is the key to solving a case, so it’s crucial to protect and preserve it from the moment it is discovered.

Never touch pieces of evidence with your bare hands to avoid contamination and physical harm to yourself. Crime scene evidence should also be properly packaged and marked with a chain of custody document. By noting who found the evidence and was in possession of it at all times, you create a paper trail and hold investigators accountable for their handling of the material.

It’s also important to use the right type of containers for the evidence that you are collecting. Dry objects can be placed in designated plastic evidence bags, while wet substances are best preserved in sealed plastic containers to prevent leakage and decomposition.

Make sure to record evidence that you find on the crime scene sketch and in photos and videos taken at the scene. Create an inventory log to ensure that all evidence is accounted for and take detailed notes of your findings. With these best practices in mind, you can safely and promptly deliver the evidence to the lab for analysis.

At Superior Bag, we provide a Superior Evidence Bag and an Economy Evidence Bag specially designed for law enforcement professionals. On each bag, you’ll find essential lines for crime scene data, such as the case number, offense, date and location of recovery, suspect, officer, and chain of custody.

Contact us today to learn more about our law enforcement products or request a sample to try one out for your next case.